I now know what a crash test dummy feels like. 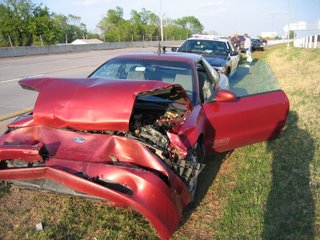 I also got to test the laptop mount in a crash situation. Damn, I hurt. Everything's good w/ me though, got a clean bill o' health from a doc. Had seatbelt on and airbag did it's job. Just an abrasion from the airbag on forearm and a bruised chest. Seeing as how it was a highway accident, at 60 mph+ (driver in front was going maybe 25-30), the mount and laptop didn't stand much of a chance. The airbags didn't do them in, although the dash did. Amazingly, the laptop only lost the display, which is totally trashed, in lots o little pieces. I have the base hooked up to an external monitor, and it works. We'll see if it's salvagable (have to find a new shell, display, and keyboard). Keyboard is functional, but a few keys (f4 & enter) are kinda messed up, but work. The passenger's airbag deployed with enough force to cause the hinged flap on it to fly up and smash the windshield. There are two distinct shatter points from the corners of the flap. That's a hell of a lot of force, considering the flap weighs less than a pound. So probe #1 hit the high milage mark of 300k, #2 dies at 190k with a crash (I just fixed everything on it too...), and I will be out looking for #3. Found another 96 with 75k on it, may have to go have a look see. Tired, going to bed. Pics of damage can be found here.
P.S. No, I was not looking at the laptop, it just happened to be up there from earlier... It was determined to be my fault by the trooper, but I'll tell the story later... In my opinion, it was the lady in the minivan's fault. (She's the one with the 6-8 month old in the front seat in my photos! No the baby did not get hurt as she did not sustain a direct hit.)
Posted by Chasing Hans at 12:38 AM